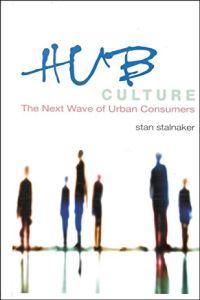 Author Stan Stalnaker contends that the most important phenomenon facing contemporary marketers is the transnational hub culture. Hub culture is urban, cosmopolitan, chic, pricey and elite. Hub types are the kind of people their great-grandparents called jet-setters. The author may be too young to remember jet setters. It may even be that he wasn’t born yet when much of what he says about marketing, branding and culture was said the first time, so whether his insights are fresh or not, he believes they are. The book is an eclectic amalgamation of puzzle-pieces of contemporary city society, such as nightclub remembrances and e-mails. Stalnaker sorts through these scraps and shards to draw a sociological portrait, trying to elevate them above the level of, "It must be important because it happened to me." getAbstract.com finds his book worth perusing, in that it does contain some worthwhile observations about the glib, flighty, self-absorbed, materialistic and brand-tyrannized denizens of the urban deserts called the Hub - just the people who might buy what you are selling.

As marketing director of the Fortune Group, Stan Stalnaker is responsible for brand development, advertising, partnerships, alliances, conferences, events and image building for Fortune magazine in Asia. He writes a column on entertainment and trends for CNN and TIME Magazine’s Asia-based Web sites.

Hub culture is composite. Even hub people are composite. Hub people knock around the world, from New York to Hong Kong to Africa to Europe. They value freedom but they also value responsibility. They are so remote from suburban life that they go to museums to look at pictures of it, or to places like the Zimmerman House in New Hampshire, where the Currier Gallery of Art preserves a Frank Lloyd Wright house. They couldn’t imagine living in a house like that, in a suburb like the one Wright must have had in mind. They can only consider living in cities - preferably big, cosmopolitan, world-scale hub cities.

Hubs loom large on the corporate marketing horizon. It’s not Detroit or Denver that count - it’s Tokyo, London and Hong Kong. New Yorkers may live on different continents, separated by oceans, but they have more in common with people who live in Singapore than those who live in St. Louis. Travel and communication are fast and cheap, so it’s easier for a company to base its marketing strategy on hubs than on national or regional markets. When CEOs talk about global markets, they talk about cities, not countries.

What Makes a Hub