Summary of Accelerating Out of the Great Recession 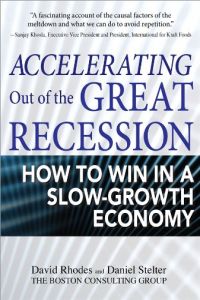 Boring history and economic lessons can drop some students into zonked-out slumber. Fortunately, this book will rouse them. International consultants David Rhodes and Daniel Stelter deliver a mix of entertainment and education that is enhanced by engaging examples and an appealing style. They solidly package business and historical lessons from the Depression era and apply them to the “Great Recession.” Their text is concise, albeit with occasional bouts of redundancy. Although the authors have attempted to create a politically neutral analysis, an astute reader might detect an apparent but not intrusive preference for conservative fiscal politics. That’s because the writers highlight the shortfalls and downsides of Democratic-administration interventions at some length and offer only minimal criticism of Republican deregulatory policies, without deeply analyzing their role in opening the door to securities crises, Ponzi schemes and the mortgage market meltdown. However, the text’s benefits outweigh any political oversights especially since modern literary evenhandedness often amounts to little more than a “plague on both your houses” anyway. The authors go beyond just diagnosing economic problems. They supply concrete, evidence-based solutions for executives who are trying to generate profits in a rigorous fiscal environment. getAbstract recommends this book to corporate leaders, strategists and managers who want to spur sales and excitement in a period of slow business growth.

David Rhodes and Daniel Stelter are senior partners in The Boston Consulting Group, an international consultancy. Rhodes, based in London, is an expert on corporate strategy and organization, and Stelter, based in Berlin, focuses on corporate finance and strategic direction.

The “Great Recession” did not develop into the Great Depression, part II, and signs have emerged that an economic rebound is under way. But here’s the other side of the coin: Governments and central banks from around the globe had to provide an “unprecedented” level of intervention to prevent a worldwide economic meltdown. Experts estimate that governments from different countries spent some $18 trillion to create stability in the financial industry and spent an additional $2.5 trillion to jump-start economic production and consumption.

Despite that massive level of intervention, underlying economic problems remain in place. It could be years before damaged companies and weakened financial institutions rebound. Meanwhile, the world faces the sharpest economic decline in decades.

The drop in production is real and severe. The International Monetary Fund (IMF) reports that the global economy fell 1.1%, with “advanced” countries posting the greatest retreat, a decline of 3.4% in 2009. For the two-year period ending in 2009, international trade and production slipped faster than they did during the Depression.