Summary of Money and Power 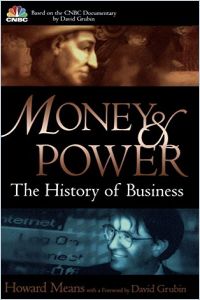 This volume, based on a PBS documentary, is as much about the unique characters who drove the evolution of business as it is about vast historic trends. Author Howard Means blends the color of a cinematic treatment with the rich context and detail of a comprehensive history. In so doing, he’s accomplished the ultimate historian’s goal: Presenting history in such a way that it is clearly relevant to modern-day life, and in this case, business. From biblical moneychangers to the miraculously large pool of Microsoft millionaires, Means traces the history of commerce from the perspective of power, asking who acquired it, how they amassed it, how they used it and what became of it? getabstract.com recommends his intense narrative to anyone in business, since business is about money, and money is, after all, power.

Howard Means has written or co-written several books, and is a senior editor at Washingtonian magazine. His books include The 500 Year Delta, Colin Powell: A Biography and The Visionary’s Handbook , as well as the novel, C.S.A. His books have been published in more than ten countries and have appeared on business bestseller lists. He won two William Allen White medals for writing. David Grubin , author of the foreword, is a producer, director, writer and cinematographer who has won eight Emmy awards and has produced more than 100 films, Grubin received a Guggenheim Fellowship and was a Montgomery Fellow at Dartmouth College. He produced Money and Power , the PBS documentary that was the basis for this book.

The moneychangers of the Bible were the earliest ancestors of today’s bankers. Economists tell us that despite their poor public reputation, they provided a valuable service, even then, as they helped stabilize currency fluctuations among various regions.

Although business may be as old as, well, the oldest profession, our modern concept of business as a form of social and economic organization is relatively recent. In part this is because economic revolution has depended on political upheaval, as embodied in the Magna Carta. Historic shifts pushed economic changes. For instance, at the same time that the American Revolution created the world’s first experiment in democratic capitalism, the Industrial Revolution devised the means of mass production. The two movements cross-fertilized. The pursuit of political freedom intertwined with the pursuit of economic liberty.

Like it or not, until recently the story of business was mostly peopled by white Western males. The legacy of this political incorrectness traces its lineage to Godric, an Englishman later dubbed Saint Godric. Born in 1065 near Walpole in Norfolk...