Summary of A Constitution for the Living 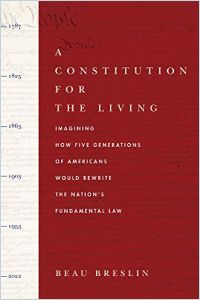 Thomas Jefferson and Thomas Paine never envisioned Americans living under the original US Constitution for centuries; they fully expected the document to be rewritten every generation or so. In this thought-provoking work that is, in part, historical fiction, academic Beau Breslin asks this question: What if Americans joined the rest of the world in periodically rewriting their constitution? He doesn’t conjure up an alternate reality for American democracy; instead, Breslin fits the new constitutions into the actual arc of the American experiment, raising important insights into US society.

Beau Breslin is a professor of political science at Skidmore College. His previous books include From Words to Worlds and The Communitarian Constitution.

Americans revere the Constitution, even as they detest the gridlock it creates.

For many Americans, the US Constitution holds a vaunted place. They see it as a sacred text, an instruction manual for democracy. Fully 88% of Americans say the Constitution remains functional and relevant today, more than two centuries after its crafting. But the US Constitution also comes in for its share of criticism. For example, many today gripe about the Electoral College – a system that in both 2000 and 2016 delivered the White House to candidates who lost the popular vote.

The Invention – and Reinvention – of Impeachment
9