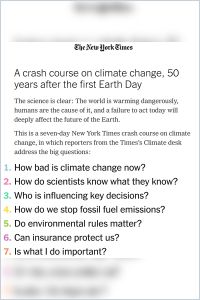 Beyond Global Warming
7
WMO Statement on the State of the Global Climate in 2019
9
Our Final Warning
8
Is It Too Late to Stop Climate Change?
8
Explainer: Nine ‘Tipping Points’ that Could Be Triggered by Climate Change
8

The Future Costs of Methane Emissions
9