Summary of A Gift to My Children 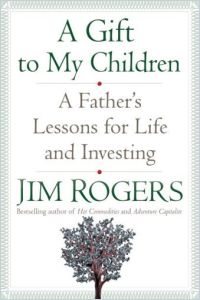 This short bestseller by Jim Rogers, one of the world’s most renowned investors, is in the form of a letter offering personal guidance and investment advice to his two young daughters. Rogers co-founded the Quantum Fund with his partner, George Soros, and established a reputation as an authority on economics, investing and markets. In his 60s, he married for the second time and became a father. In this book – written in first person from “your father” with a slight, sweet undertone of talking down to the children’s level – he tells his daughters many anecdotes about his experiences to illustrate old-fashioned nuggets of fatherly guidance. He recommends saving money, cultivating good habits, working hard, studying and thinking about the future. getAbstract suggests this book to anyone – including those two fortunate little girls – who would welcome a few paternal life-lessons, some good inside-business stories and a side dish of investment advice.

Jim Rogers co-founded the Quantum Fund with George Soros. He wrote A Bull in China, Hot Commodities, Adventure Capitalist and Investment Biker. He has been a professor of finance at Columbia University’s business school and is a media commentator.

Jim Rogers grew up in the little town of Demopolis, Alabama. At age six, in 1948, he started a peanut parching business. Thanks to a loan from his father, Rogers was able to invest $100 in a peanut parching machine, so that he could sell dried peanuts at Little League games. He worked hard and hired his friends. In five years, he repaid the loan from his father and had another $100 in the bank.

As a young man, Rogers worked in his uncle’s store, selling sandwiches and tobacco to workers from the nearby factory and stockyard. He worked so diligently that his uncle gave him a raise without Rogers requesting it. Later, he got a job with a construction contractor and always tried to stay busy. When Rogers lacked any immediate task, he would sweep. His work was so impressive that the contractor taught him skilled construction work, such as carpentry and roofing.

Rogers attended Yale on scholarship and then went to Oxford University, where he set his first Guinness record (in rowing). He eventually entered the field of money management. At age 30, he and his business partner, George Soros, co-founded the Quantum Fund. Rogers retired at age 37 and decided...