Summary of A Modern Monster 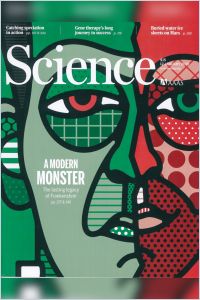 Mary Shelley’s novel Frankenstein, or The Modern Prometheus celebrated its 200th anniversary in 2018. Although the novel has never stopped fascinating, intriguing and inspiring people, its bicentennial provides an excellent opportunity to delve into deeper conversations about some of the key issues it raises, such as the dangers of technology and the social responsibility of scientists. The January 12, 2018 issue of Science magazine does just that, featuring a collection of essays on the continued relevance of Frankenstein’s multi-layered – and sometimes misunderstood – message just at a time when technology is advancing at a dizzying speed. getAbstract believes scientists and non-scientists will enjoy the debates triggered by this classic novel, still so much more than a well-told horror story.

In Mary Shelley’s Frankenstein, the protagonist brings to life a creature that ends up taking revenge on its creator for abandoning it.

Scientist Victor Frankenstein builds a creature out of scavenged body parts. Horrified by his own creation, he abandons it, leaving the giant man-like creature to its own devices. The creature then takes revenge on its creator by hunting down and killing his loved ones.

Mary Shelley’s inspirations for the novel include contemporaneous scientific experiments on potential ways to resurrect corpses.

As Jon Cohen explains in his essay, “How a horror story haunts science,” Mary Shelley began writing the novel at age 18 while spending a summer at poet Lord Byron’s lake house in Switzerland. Some psychologists trying to understand her state of mind at the time point to the loss of her first baby a year earlier, in 1815. In her journal, she recounted a dream of bringing her baby back to life. Shelley herself, however, said her inspiration came from contemporaneous scientific experiments. In particular, she points to the work of Luigi Galvani, who used electrocution to make a dead frog...

The Poetry and Music of Science
9
Sex and Gender Analysis Improves Science and Engineering
8
The Ethical Algorithm
10
Sawbones: Coronavirus
9
Why the Coronavirus Is So Confusing
9
How Science Beat the Virus
9