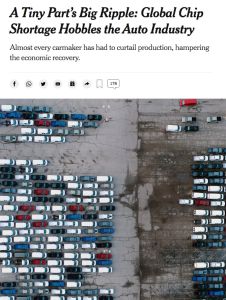 Almost every carmaker has had to curtail production, hampering the economic recovery.

Auto assembly plants are slowing, and dealerships are empty because semiconductors are in short supply – semiconductors run cars’ entertainment systems, fuel injection and cruise control. They are necessary in electric cars and autonomous vehicles. Due to the shortage, one GM plant closed. Others are reserving limited chip supplies for high-end brands. As Jack Ewing and Neal E. Boudette report in The New York Times, the chip shortage occurred as the economy revived, and people became eager to buy cars, but semiconductor manufacturers focused on the lucrative consumer electronics market, including smartphones.

Car assembly plants are slowing due to a semiconductor shortage.

Car assembly plants around the world are slowing down, and car dealers face empty lots, due to a lack of a tiny part – semiconductors. These small chips play a huge role in contemporary cars. They run information and entertainment systems, regulate fuel injection and direct cruise control.

Due to a lack of chips, a General Motors plant in the Midwest shut down altogether. Mercedes-Benz reserves chip installation for its higher-priced models and has closed down plants that manufacture less expensive cars. Porsche told American dealers that customers now must wait additional months for their cars.

The slowdown came just as the economy started to bounce back from the pandemic...

Jack Ewing writes about business, banking, economics and monetary policy from Frankfurt. Neal Boudette is a US auto industry beat reporter at The New York Times.

The Modern Supply Chain Is Snapping
7

Why Everything Is Sold Out
8

The Case of the Missing Toilet Paper
8

“I’ve Never Seen Anything Like This”: Chaos Strikes Global Shipping
9

COVID-19 and the Health Sector
9 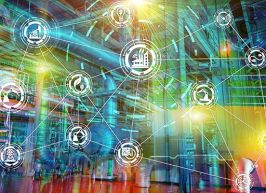 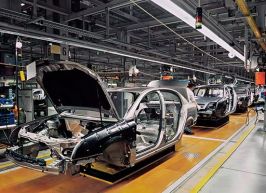