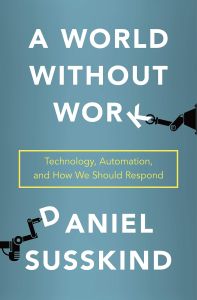 A World Without Work

Technology, Automation, and How We Should Respond

The review below was first published in the getAbstract Journal on Sep 7, 2020.
We’ve reviewed this title for you as we currently cannot offer a summary.

A Little Help from the Big State

Recognizing that the Age of Labor is ending, Oxford economist Daniel Susskind argues for the Big State to help create a universal income to free people from work.

In this New York Times Book Review Editor’s Choice, Oxford economist Daniel Susskind argues that machines will create mass unemployment and that society should prepare for the Age of Labor to end. Comprehensive and elegantly readable, Susskind describes the threat AI poses to jobs and postulates an optimistic post-work world in which the state guarantees a safe livelihood. The Times said of Susskind’s work: “Should be required reading for any potential presidential candidate thinking about the economy of the future.”

Susskind has the credentials to wrestle credibly with these issues. A career development fellow in economics at Balliol College, Oxford University, he served as policy analyst and policy adviser for the British Prime Minister and Cabinet and was a Kennedy Scholar at Harvard University. He co-authored, with his father, Richard Susskind, The Future of the Professions. The Guardian called Susskind’s book, “An explainer rather than a polemic, written in the relentlessly reasonable tone that dominates popular economics: the voice of a clever, sensible man telling you what’s what.”

8
Book
The Future of the Professions

Future of Work
AI in the Workplace