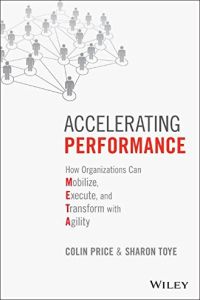 Colin Price and Sharon Toye, management consultants and organizational behavioral experts, draw upon an extraordinary library of data to create a blueprint companies can follow to change their cultures and accelerate overall improvement. They based their META framework – “Mobilize, Execute and Transform with Agility” – on the idea that businesses exist to fill customer needs, as well as to make a profit, and that they can best fulfill that mission by “reducing drag,” enhancing drive and improving organizational capabilities. The authors provide diagnostics in the book and online, allowing readers to pursue interactive learning even beyond the text’s “superaccelerator” case studies. However, as consultants have been known to do, they tend to attach fancy new names to familiar concepts and to repeat themselves. The META approach may seem overwhelming to execute, but the authors’ abundant charts, graphs, lists and examples are a big help. getAbstract finds that this thoughtful, comprehensive approach to organizational “transformation” outlines a daunting task, but it has a lot to offer those with the resources to build the “right recipe” for change.

Colin Price and Sharon Toye are leadership consultants at Heidrick & Struggles, where Price is an executive vice president and the global managing partner, and Toye is a partner in the London office. Toye writes for Business Strategy Review, Strategy+Business and Managerial Forensics. To assess whether your firm is a superaccelerator, see AccelerationAssessment.com

Culture at the Core

Across the United Kingdom, Europe and the United States, former leading companies, including British Petroleum, the BBC, Volkswagen and Lehman Brothers, all faltered for similar reasons: flawed cultures that let them stray off course. In shielding their cultures from the realities of the “hard science” of organizational behavior, the companies’ leaders shortchanged themselves. Instead of making such mistakes, realize that “the soft stuff” of behavior management “is really the hard stuff” and incorporate that science into their leadership practices. When you try to change your culture, the data will “set you free.”

Everything in the world has accelerated over the past decades. The adoption of technological advances, how quickly people walk and even the growth rate of chickens has gotten faster. But too much speed leads to blindness. To protect your company, watch for early signs of looming disruption. It can take years and sometimes decades for an industry to upend completely. Successful firms focus first on their culture. Then they look beyond the horizon to make plans and accelerate for the future in a structured, measured way.