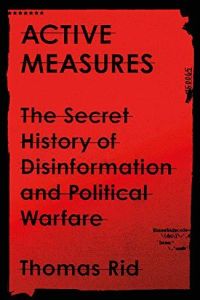 The Secret History of Disinformation and Political Warfare

The review below was first published in the getAbstract Journal on Dec 23, 2021.
We’ve reviewed this title for you as we currently cannot offer a summary.

Disinformation Across the Decades

Thomas Rid, professor of information security at Johns Hopkins University, tells how digital disinformation abounds as bad actors exacerbate political differences and undermine trust. In this gripping account, Rid charts the rise of disinformation as political warfare after World War I and its evolution during the Cold War. In the 21st century, Rid notes, digital technologies and the internet transformed disinformation, threatening liberal democracy worldwide. Among Rid’s most startling themes is that Russian disinformation attacks against the United States have been going on for decades.

Among many other positive reviews, this work garnered mention as one of The Washington Post’s 50 Notable Books of Nonfiction and as a Best Book of the Year by The New Statesman. Rid’s engrossing style raises this from political history to engrossing, cautionary thriller.