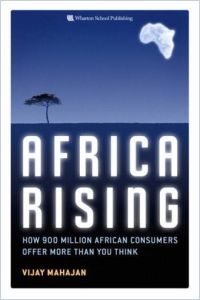 “We know everything about how Africans die, but we know little about how Africans live,” said Swedish author and self-proclaimed African-at-heart, Henning Mankell. This is a book about Africa, but its protagonists are not disease-ridden men and women, starving children or raging warlords. Vijay Mahajan paints a picture of a continent overflowing with entrepreneurial spirit and economic opportunity. He excitedly strings together story after story of entrepreneurial gardens planted in what looked like deserts. At the same time, he makes it quite clear that if you expect to make money in Africa simply by copying business models from elsewhere, you might as well forget about it. To succeed, you must take the time to understand how Africans live and, especially, to learn what their daily challenges are, be they economic, political, institutional or existential. Opening the door of opportunity in Africa requires just a little extra portion of creativity. Mahajan covers a lot of ground in this book. His inspiring case studies will teach you lessons about innovation and entrepreneurship that you can apply anywhere in the world. However, while this book might encourage you to plunge into business in Africa, you will have to turn to another source for hands-on advice. For that reason, getAbstract recommends this work to entrepreneurs and strategists who have not yet considered the African market – not those who are ready to go.

“Inspiration Is All Around You”

In 2006, Zimbabwe’s economy was, as it remains, in tatters. Harmful domestic policies exacerbated by Western sanctions had led to hyperinflation, mass unemployment and usurious interest rates. Tourists stayed away, so the souvenir and car rental businesses at the airport closed, and the taxi drivers became unemployed. A billboard screaming the message that “Inspiration is all around you” was in stark contrast to the harsh reality. Few places could be less inspiring.

Yet, even then, some companies prospered, and they continue to do so. Innscor began as a fast-food chain in Harare, Zimbabwe’s capital, in 1987 and became profitable within the first six months. Expanded and diversified, Innscor now owns a number of restaurants that cater to different segments of society and has outlets in more than 12 countries in Africa. In 2007, 19 of southern Africa’s 50 leading companies outside South Africa were Zimbabwean. If a country like Zimbabwe yields businesses like this, imagine what opportunities must exist in more stable, less scarred countries.

Africa One, Two and Three