Review of Age of Ambition 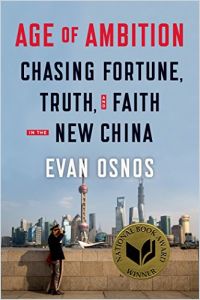 Evan Osnos is a Pulitzer Prize and two-time Overseas Press Club award-winning journalist and New Yorker staff writer. He earned the 2014 National Book Award for Nonfiction for this detailed chronicle of the human and social drama of China’s rise to becoming a world financial powerhouse. Osnos combines observations, interviews and in-depth research to paint a portrait – in social vignettes – of China’s embrace of (almost) free market capitalism amid a parallel increase in state censorship and repression. Osnos follows the journeys and fates of a variety of people in order to reveal the Chinese government’s response to individual ambition and yearning for autonomy. Osnos proves entertaining and perceptive, if rambling. He focuses on people, but it’s the facts his stories uncover that resonate. Osnos’s journalism should fascinate anyone conducting business or living in China and anyone considering either, as well as professors, students, nongovernmental organization personnel, international investors and policy makers.

New Yorker staff writer Evan Osnos won the 2014 National Book Award for Nonfiction for Age of Ambition. He won a Pulitzer Prize as a member of a Chicago Tribune investigative team and he also has garnered two Overseas Press Club awards.

Osnos’s jagged storytelling style stymies long-term concentration. He leaps from one revealing anecdote to another, but he doesn’t provide a unifying overall structure. A wise reader will seek out and focus on Osnos’s most evocative tales. If one story doesn’t hold your interest, it will likely grow no more compelling as you read. Shift to the next, or search for specific areas that interest you.

Any failings in Osnos’s structural choices may spring from his greatest gift: his experience and storytelling orientation as a newspaper journalist. In the newspaper world, facts drive narratives and human character traits exist to illuminate facts, not as narratives on their own.

How Innovation Works
9
Creative Calling
8
Eleanor
9
Stories that Stick
8
She Made It
8
Diversity, Inc.
8