Summary of All the Kremlin's Men 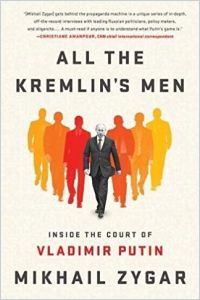 As Russia’s role on the global stage grows more provocative, Russian journalist Mikhail Zygar weighs in with a no-holds-barred look at Vladimir Putin’s leadership style. Zygar makes the compelling argument that to understand Putin you must look at the crucial insiders who have helped shape his regime. Putin, the author posits, is a somewhat reluctant ruler – and partly a creation of his closest advisers. Though Zygar doesn’t present an entirely airtight case for this claim, he offers ample evidence illustrating that there’s no overarching endgame behind Putin’s transgressions against human rights and international sensibilities. Instead, Zygar argues, Putin’s leadership is characterized by a pattern of lashing out, time and again, against some real or perceived threat to Russia or to Putin himself. Viewed through this prism of score-settling, Putin’s actions begin to make a sort of strange sense. Though this book pre-dates Moscow’s meddling in the US presidential elections, it can help readers imagine how such campaigns might bring Putin satisfaction. Zygar’s account is overly intricate at times, bogged down as it is in Putin’s ever-changing roster of consiglieres; but the prose is stellar. getAbstract believes this important book may be the closest thing to an insider’s account of the Kremlin and its secretive ruler.

Mikhail Zygar is the former editor-in-chief of TV Rain, the only independent TV station in Russia. VICE News called him “the last journalist in Russia.”

A Strongman – But Not One Man

To outsiders, Russia is a nation controlled by one man and his clear agenda. Closer examination of Vladimir Putin reveals his rule as the result of “a huge collective mind.” Putin himself focuses on ascertaining how he can maintain his popularity: He has never fully trusted polling data and approval ratings and believes that his widespread popularity could vanish at any time. Meanwhile dozens of men within Putin’s inner circle work continuously to determine how their leader can keep his grasp on power. This shadowy brain trust deludes itself into thinking that logic and big-picture strategy underpin its decisions. In fact, Putin’s and his advisors’ moves are strictly tactical, short-term responses to outside stimuli, including constant conflict and unceasing enmity from abroad. From this perspective, Putin’s actions are a necessary and inevitable response to the threats posed by ruthless foes in Washington and the encroaching power of NATO.

The Rise and Fall of Western Alliances

When Putin became president of Russia in 2000, he immediately set about courting...