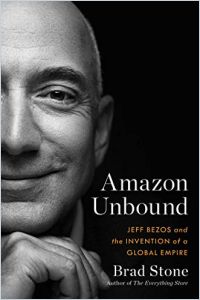 Amazon founder Jeff Bezos has made billions by endowing his company with a relentless customer focus. Amazon has not only given customers what they want, such as unlimited choice and fast delivery, it also has met needs customers didn’t know they had – such as for Alexa, a voice-controlled digital assistant. Thanks to such ventures, says Bloomberg News editor Brad Stone, Amazon has achieved a trillion-dollar market capitalization, and Bezos has become one of the richest people in the world.

Despite its enormous size, Amazon has retained an innovative spirit.

The company’s growth occurred in three broad phases. The first surge, from 1995 through roughly 1999, rode the dot-com bubble. When the bubble burst, around the turn of the century, Amazon nearly went out of business.

The company’s resurgence came from focusing on technological innovations, such as the Kindle e-book reader, and from improving the customer experience by widening its product range, lowering prices and speeding up deliveries.

During the third phase of growth, coinciding roughly with the 2010s, Amazon reinvented itself as more than an online retailer. It introduced Echo speakers and the accompanying Alexa digital assistant. It also became a leading provider of cloud computing capacity with Amazon Web ...

The Most Important Apple Executive You’ve Never Heard Of
7

Invent and Wander
8
All In
8