Crown, 2013
From AMERICAN ICON: Alan Mulally and the Fight to Save Ford Motor Company Copyright © 2012 by Bryce G. Hoffman. Published by Crown Business, an imprint of the Crown Publishing Group, a division of Penguin Random House LLC
ISBN: 9780307886064
Pages: 432 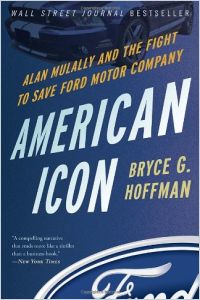 It isn’t often that an insightful business history qualifies as a great beach read. Journalist Bryce G. Hoffman’s chronicle of the Ford Motor Company’s post-2008 turnaround transforms corporate restructuring into a sweeping drama, full of cliffhangers and vibrant characters. Hoffman, a reporter for The Detroit News, is a thorough historian who offers granular details on manufacturing capacity, labor negotiations, debt structures, and more. He’s an accomplished prose stylist with a novelist’s flair for storytelling. He recounts how Ford recruited Boeing executive Alan Mulally to pull the company from bankruptcy. Under Mulally’s leadership, Ford weathered the turbulence of the global financial meltdown and emerged as the world’s most profitable automaker. getAbstract recommends this true-life yarn to corporate strategists, product-development executives, financial officers, labor representatives, auto industry insiders and anyone who likes a compelling tale of will, brains and redemption.

In 2006, the Ford Motor Company was on the brink of disaster. Ford, along with its domestic competitors General Motors and Chrysler, once dominated the US automotive market. But in the boom years of post-World War II America, the carmakers grew bloated and complacent. They weren’t ready when competition from Asian and European manufacturers offered not only better quality but also greater fuel efficiency.

In the early 2000s, the major automakers were in trouble. Most analysts believed Ford would be the first to fall into bankruptcy. Ford was battling its own dysfunctional corporate culture and was losing customers due to “lackluster” designs and poor quality. Its share prices and debt ratings had plummeted, and the company was projecting a 2006 loss of more than $12 billion.

In the midst of this maelstrom, Ford appointed former Boeing executive Alan Mulally as its new CEO. Within a few years, General Motors and Chrysler filed for bankruptcy, but Ford pulled off one of the most spectacular turnarounds in history.

Ford and Its Culture

Since its founding in 1903, Ford had a tendency to fumble its biggest successes. For instance, ...

Connection Culture, Second Edition
9
When the Center Held
8
Leading with Gratitude
9
The Motive
8
Go Long
8
Work Is Love Made Visible
8