Summary of An Economist Gets Lunch 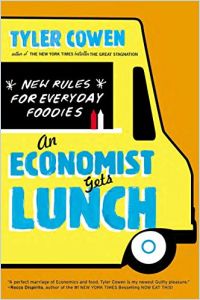 Economist Tyler Cowen’s gutsy philosophical book explains the damage American food trends are doing to the global economy. Because he is a foodie himself, with a doctorate in economics from Harvard, readers may take Cowen seriously when he throws good-natured jabs at locavores, food snobs and slow-food advocates. He believes politicians and marketing folks with hidden agendas are duping everyone, so if you’re doing more harm than good by buying local, organic food, you’re not entirely to blame. Cowen offers a few truly enlightening economic theories that make his work well worth reading. For instance, note his take on how people who pay 500% markups for beer subsidize your fancy meals and Starbucks latte. That said, his book doesn’t always seem to know what it really wants to be. It’s part food-adventure diary and part purposefully provocative work of economic theory. Cowen offers some chapters that deal directly with the subject at hand, and some that drift off into the virtues of Asian food markets and Southern barbeque. getAbstract advises foodies, economists and environmentalists to sit down and grab a bite with Cowen. Even when he wanders off topic, he’s interesting company.

Tyler Cowen is a professor of economics at George Mason University. He writes regularly for The New York Times and other media outlets.

Americans are on a crusade against agribusiness. They demand local, organic, humanely raised food that hasn’t been mass-produced or scientifically modified. While many shoppers willingly pay much more for such food, some can barely afford even the shipped-in, pesticide-laden, obesity-inducing processed food they’re eating now. The food industry is capitalizing on trendy demands by creating green supermarkets and eateries that eagerly accept every dollar consumers want to spend. From a global, historical and economic perspective, the choice isn’t between good, costly food and bad, cheap food; it’s between consumer education and marketing hype.

The food snobbery that emerged from the backlash against convenient packaged American food is based on three precepts: 1) Good or slow food has to be expensive, 2) inexpensive food produced by agribusiness is bad, and 3) experts must tell people what to do since food buyers don’t or can’t innovate. These are myths. “A lot of the best food is cheap.” Cheap food isn’t necessarily bad food; and being a wise, informed buyer is your best retaliation against hype.