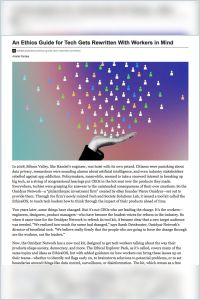 As internet-based technologies and artificial intelligence capabilities mature, a concerned public wants greater protection from surveillance and the potential biases and abuses of artificial intelligence (AI), as well as protection against the unintended harms new technologies can inflict on democracy. These concerns alarm tech workers far more than they worry tech CEOs. Wired senior writer Arielle Pardes looks at the worker-led movement for greater accountability in the tech sector, and particularly at the Omidyar Network’s Ethical Explorer Pack, a framework of eight risk factors to consider in discussing these issues.

Arielle Pardes covers human interaction with technology as a senior writer for Wired.

In 2018, increasing consumer and government concerns about monitoring artificial intelligence (AI), ensuring data privacy and reducing “app addiction” put Silicon Valley tech companies in the national spotlight. Members of the US Congress worried about tech monopolies and contemplated breaking them up. Those in the tech industry grappled with the “unintended consequences” of the technology they created.

Working through his philanthropic Omidyar Network, eBay founder Pierre Omidyar set up the Tech and Society Solutions Lab. The Lab created the EthicalOS toolkit to give tech leaders a framework for troubleshooting the social impacts of technology products.

However, in 2020, the technology workers who engineer, design and manage tech product development became the vocal advocates of industry reform – not their CEOs. Recognizing that workers would ultimately force change, the Omidyar Network created a new framework and tool kit called the Ethical...

The Citizen’s Perspective on the Use of AI in Government
8
What Big Tech Wants Out of the Pandemic
8
The Dawn of the Deep Tech Ecosystem
9
Top 10 Digital Transformation Trends for 2020
8
Is Big Tech Merging With Big Brother? Kinda Looks Like It
10
Capitalism’s New Clothes
7