Summary of And the Money Kept Rolling In (and Out) 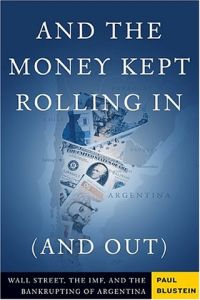 This is a very readable, lively story of how Argentina overcame decades of monetary mismanagement and put itself on the path to economic growth during the early 1990s only to descend again into economic chaos. getAbstract recommends this book to those interested in international finance, although it suffers slightly from a moralistic tone, as author Paul Blustein points an accusing finger at international banks and brokerage firms. One might also have hoped for a bit more insight into what happened to the billions of dollars that flowed into Argentina during its brief boom years. But Blustein's expert analysis (organized around metaphorical references to the musical Evita) says much about the dark side of globalization and points to some severe, apparently recurring problems in the international financial system. Most instructive is his observation that elements of Argentina’s experience are now apparent in the flow of funds to emerging markets newly favored by international investors. Therefore, this book unfortunately may be a harbinger of things to come.

Paul Blustein, a staff writer at The Washington Post, has written about business and economic issues for a quarter of a century. He is also the author of The Chastening: Inside the Crisis That Rocked the Global Financial System and Humbled the IMF.

The story of Argentina’s bubble is one of euphoric optimism, reprehensible greed, irresponsible regulation and tremendous suffering, including children dying of malnutrition and people losing everything as their banks collapsed.

Major international investment banks and brokerage firms collected about $1 billion for their services underwriting Argentine bonds from1990 to 2000. With that much money at stake, banks had no incentives to publicize doubts about whether these bonds were truly sound investments. As was the case in the US corporate stock market scandals during the same period, security analysts whose pay depended on keeping stock salespeople prosperous painted too rosy a picture of the investment quality of Argentine bonds.

But conflicts of interest were not the only factors driving Argentine investments. The index that investors use to measure money managers’ performance encouraged imprudent investment in Argentina because it gave the most weight to the country that borrowed the most money. Thus, the more indebted Argentina became, the more important it was for money managers in emerging markets to buy additional Argentine ...

Misadventures of the Most Favored Nations
8

Global Gay
8
And the Weak Suffer What They Must?
8
Moneyland
8
How to Speak Money
8
Russian Views of the International Order
8
The End of Europe
7