Summary of ‘Angels’ in Hell 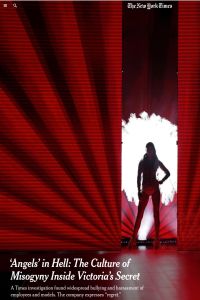 The New York Times Magazine reveals the harassment Victoria’s Secret models and other female employees regularly experienced from executive Ed Razek, investor Jeffrey Epstein and photographer Russell James. Women faced name-calling and propositions, and despite reports to HR, these behaviors continued for decades. This exposé by Jessica Silver-Greenberg, Katherine Rosman, Sapna Maheshwari and James B. Stewart reveals a corporate culture fully vested in exploitation and harassment, with few avenues for models and other women to protect themselves.

In 1982, Leslie Wexner purchased Victoria’s Secret for $1 million and built it into a global phenomenon. Its ad campaigns feature models wearing luxury underwear and little else except, sometimes, elaborate angel wings, as they pose in front of flashy explosions and big motorcycles. The company’s marketing focus on how thin women attract men contrasts with contemporary notions of beauty or how women want to present themselves. These shifting social mores affected the company’s bottom line. Shares of L Brand have lost 75% of their worth since their highest valuation in 2015 amid many Victoria’s Secrets store closings.

As an example of the toxic environment at Victoria’s Secret, a suggestion to include more diverse body types drew the ire of Ed Razek, the chief marketing officer for L Brands. He rejected the idea on the basis that nobody undergoes cosmetic procedures in order to become fat.

The Problem with HR
7
What Does It Mean to Be a “Karen”? Karen Explains.
8

A Woman’s Guide to Salary Negotiation
7