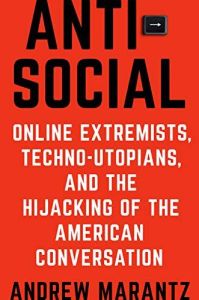 Online Extremists, Techno-Utopians, and the Hijacking of the American Conversation

The review below was first published in the getAbstract Journal on Nov 23, 2020.
We’ve reviewed this title for you as we currently cannot offer a summary.

The Death of Discourse

New Yorker staff writer Andrew Marantz writes extensively about technology, social media, the alt-right and the press. His insights into American social media patterns and politics have garnered only positive reviews. For example, The New York Times named Antisocial among its Notable Books for 2019, and the prestigious New York Review of Books named it an Editor’s Choice. Vogue got right to the point by calling it “devastatingly relevant.”

The United States has always been an iconoclastic, anti-authoritarian country, Marantz writes. Early in the 21st century, idealistic computer programmers created “social media.” They believed, the author reminds readers, that social media would connect diverse people and increase society’s well-being. Instead, people use social media to disseminate misinformation and hate, thus transforming the American conversation in awful and shocking ways. Marantz doesn't mind being controversial, so you know he gets around to President Trump.