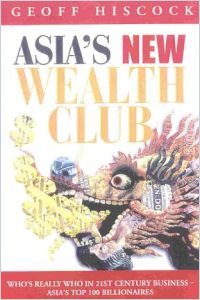 Geoff Hiscock profiles Asia’s top 100 billionaires in this fascinating overview of the region’s economic landscape. The first half of the book examines the Asian economy, setting the stage for the later depictions of the Asian rich and famous. Hiscook’s in-depth reporting shines, as does his conversational style. getAbstract.com recommends this book to all readers with an interest in the global economy.

Geoff Hiscock is the International Editor of Australia’s national daily newspaper, The Australian. Based in Sydney, he travels extensively through Asia. During a 30-year media career, he has lived and worked in Tokyo, Hong Kong, and Bangkok.

The Asian business world is home to hundreds of thousands of entrepreneurs, and by some estimates, more than 100,000 U.S.-dollar millionaires. The combined net worth of Asia’s top 100 billionaires is more than U.S. $300 billion. By looking at these top 100 - how they came by their money, how they coped with the dramatic changes to the Asian business scene that followed the regional financial crisis and how they are making the most of opportunities in the new economy - you can get a dramatic overview of the growing Asian economy itself.

Japanese billionaire Toshihiro Maeta of Mobilephone Telecommunications says, "The United States may be the first in Internet usage, but Japan and Europe are leading the technology." Nicholas Negroponte, head of the Massachusetts Institute of Technology’s Media Lab, believes that ultimately Chinese will become the dominant language on the Internet because China’s one billion-plus population will outnumber English speakers online.

Throughout the economics of Asia, money is only part of business success. From the free-wheeling capitalism of Hong Kong to the market socialism of Vietnam and the technology of Singapore, ...