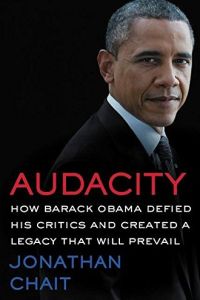 New York magazine and Los Angeles Times political analyst Jonathan Chait, a leading liberal voice, cites liberal disappointment with Barack Obama’s two terms as president and tells them to cheer up. He asserts that Obama’s presidency was “a historic success.” In discussions of Obama’s economic policy, health care reforms, approaches to climate change and foreign policy, Chait builds a sturdy articulate case that America’s 44th president accomplished his policy goals despite adamant Republican opposition. Obama’s detractors may feel Chait downplays important failures, such as immigration reform, and could find Chait’s conclusions as to the durability of Obama’s successes debatable. But Obama’s supporters will find ample cause to reconsider or reaffirm their assessment of his tenure, along with reassurance that many of his reforms will endure. While always politically neutral, getAbstract believes this partisan overview of Obama’s presidency will intrigue historians, students, professors and anyone interested in US politics.

Jonathan Chait is an editor and political analyst for New York magazine and a Los Angeles Times columnist. He has held editorial positions at The New Republic and The American Prospect.

When Barack Obama outlined his priorities in his 2009 inaugural speech, he listed an array of significant challenges, including: a broken finance industry, the threat of a depression, global climate change, a dysfunctional health care system, lack of accountability in education and America’s deteriorating moral standing. As he endeavored to meet these formidable challenges, Obama was working against powerful political countercurrents in a polarized environment devoid of the traditional spirit of congressional bipartisanship. Despite the oft-stated notion that Obama’s presidency fell short of his promises, he accomplished practically all of the policy goals he set.

An economic crisis of unprecedented size was already underway when Obama took office. Economists predicted that the United States would suffer a $2 trillion “output gap” – the decrease in the potential size of the economy – over the coming two years. The economy required a gigantic stimulus, in the form of deficit spending commensurate with the expected output gap. Republicans rejected deficit spending as a means to stimulate...