Summary of Average Is Over 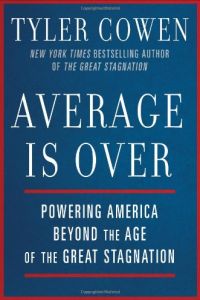 The great “hollowing out” of the US economy is no mirage. That most Americans are falling behind is a measurable trend. Prominent economist Tyler Cowen lays out the details in this compelling read. Cowen doesn’t expect robots to take your job, but he is a realist and warns that those US workers who lack specialized skills and educational credentials face a downwardly mobile future. His conclusions align more closely with today’s economy than when he first published this report in 2013. getAbstract recommends Cowen’s engaging study to employees, employers, investors and policy makers seeking insight into fast-changing labor markets.

Tyler Cowen is a professor of economics at George Mason University. He writes the Marginal Revolution blog. His previous books include The Great Stagnation and The Age of the Infovore.

In a dramatic shift that promises to continue, the US job market has fundamentally changed in recent years. Unskilled workers face shrinking wages, while highly skilled workers enjoy gains. In the decade from 2000 to 2010, inflation-adjusted wages for workers holding only high school degrees declined 11%. American workers fall into two camps. On one side, well-educated people who know how to manipulate machines are thriving. On the other side of the divide, midrange workers are finding that their jobs put them in competition against computers.

In the ruthless reality of the new labor economy, unskilled workers or those whose skills computers can easily replace are most at risk. Driverless cars could replace long-haul truckers and bus and taxi drivers. Software that writes news stories or grades papers could replace journalists and teachers.

Temp
9
The Future of Work
9
Not Working
7
Squeezed
8
Good Economics for Hard Times
8
Women vs. Capitalism
8