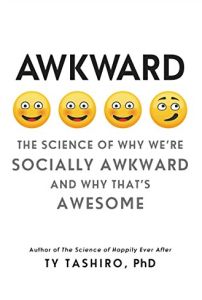 The Science of Why We're Socially Awkward and Why That's Awesome

Professor and TED speaker Ty Tashiro, who also wrote The Science of Happily Ever After, has a special faith in awkward people. He urges them to see accepting their oddities and special talents as the doorway to achieving amazing things. He explains that high achievers – whom some other people might see as awkward – have the ability to focus intently on a limited area. They search with zeal for answers to questions outside the mainstream. Tashiro explains the challenges that awkward people face and how they contribute to society. They strive to excel in areas that interest them, like technology, culture or entertainment. If you feel awkward or if you’re a manager who wants to harness the talents of awkward people, you’ll welcome Tashiro’s insights and advice.

“Awkward people” perceive their environment in a distinctly differently way than “non-awkward people.” People who aren’t awkward sense the nuances in a room, for instance; they know what conventional behavior demands. Awkward people see the world in disconnected patches. They fail to see the big picture, though they perceive certain parts of it with great clarity.

Awkward people seek professional areas where they can work alone. They like to deal with subject areas that have their own internal logic, like mathematics, software coding, gamification or collecting. They have a passionate desire to comprehend fully the subjects they find interesting. They often perceive issues that other people might ignore or dismiss as mere details. Awkward people work in a variety of occupations, but tend toward back-office jobs rather than directly serving customers.

Awkward high achievers can focus intently on a limited target subject. They search for answers to questions that could fall outside of mainstream subjects. They have the desire to excel in distinctive interest areas, whether they concern technology, culture or entertainment. When...

Taking the Work Out of Networking
8

The Swiss Army Knife for Leaders
8