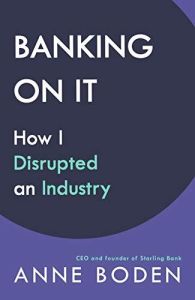 How I Disrupted an Industry

Anne Boden details the astonishing narrative of how she created the United Kingdom’s first all-digital bank.

In this intriguing insider story, British banker Anne Boden – founder and CEO of Starling Bank, the United Kingdom’s first digital-only bank – describes her battle to build a virtual financial institution. Boden acknowledges she’s an unlikely fintech entrepreneur: She comes from the staid world of British banking, and she didn’t catch the start-up bug until she was in her 50s. In her compelling narrative, Boden offers a frank account of her setbacks and successes. Would-be entrepreneurs will find her advice particularly instructive.

The Times named Boden’s tell-all one of its Top Five Best Business Books of the Year. The Observer called it “a banking blockbuster,” and The Financial Times said that “if there was ever a business book suitable for TV adaptation, this is it.” Yahoo Finance wrote that it “sent shock waves through the tight-knit world of UK tech and venture capital.”

Yes to the Mess
Book
Ikigai
Book
Leadership, Reinvented
8
Book
Start with Why