Summary of Barking Up the Wrong Tree

HarperOne, 2017
BARKING UP THE WRONG TREE: The Surprising Science Behind Why Everything You Know About Success Is (Mostly) Wrong by Eric Barker. Copyright © 2017 by Eric Barker. Published by arrangement with HarperOne, an imprint of HarperCollins Publishers
ISBN: 9780062416049
Pages: 320 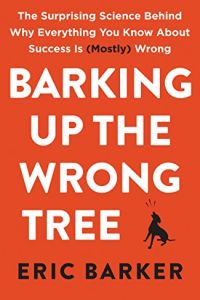 This wide-ranging self-help style guide to a better life and career covers an enormous amount of territory. From whether to play it nice and straight, manipulate like Machiavelli, or “fake it until you make it,” lifestyle expert Eric Barker reels you in with all sorts of research-based evidence on one side, only to yank the carpet out from under your feet with at least as much evidence for the other alternative. His back-and-forth style continues through more than 250 pages of studies and stories, cases and examples, including how to get off the unhealthy wheel of competition, create your own definition of success and plan your life accordingly. As Barker points out, for every expert and every study, there are equal and opposite experts and studies, so read with a bit of skepticism and trust your judgment as you decide what applies to you. getAbstract recommends this guide about making productive career choices and finds that it would be especially useful to anyone just starting a career.

Eric Barker is the creator of the blog “Barking Up The Wrong Tree” which has more than 325,000 subscribers and is syndicated by Time magazine as well as other media outlets.

Yin and Yang – Opposite Life Choices

High school valedictorians do well in college and in life; most of them earn graduate degrees and almost half get top jobs. But they rarely change the world. Kids who conform excel in class and keep conforming throughout their careers, yet rule breakers are the ones who shake things up. A study of 700 American millionaires reveals they had a mean grade point average of 2.9.

Outliers have different approaches and different genes. Their unique mix of personality traits gives society its greatest geniuses, musicians and leaders. Yet they frequently suffer depression, violent tendencies and alcoholism. But some factors that seem to be disadvantages sometimes become a competitive edge. Olympic swimming champion Michael Phelps looks out of proportion on land, where he’s not much of an athlete. But his long arms, short legs, and big hands and feet make him weirdly aquatic and perfectly built to win gold medals in the pool. People who survive tragedies, like losing their parents at a young age – for example, Abraham Lincoln, Mark Twain, Gandhi and Michelangelo – often go on to incredible accomplishments.