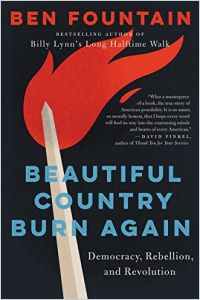 So surreal was America’s 2016 presidential election that perhaps only a fiction writer could fully capture the high-stakes craziness. In this no-holds-barred collection of ruminations and essays, acclaimed novelist Ben Fountain aims his withering gaze at America’s blind spots regarding race, religion, greed and imperialism. Along the way, Fountain skewers candidates on both sides of the ideological spectrum: Ted Cruz speaks in a “righteous warble.” Donald Trump is a “disturbed” and “megalomaniacal” huckster. Hillary Clinton possesses a “matron’s bulk.” Bernie Sanders is “the old white guy you see at every CVS you ever walked into badgering the poor pharmacist tech at the pickup counter.” For their part, American voters are “blithering dupes.” Cheap shots? Perhaps, but also entertainingly honest.

Racial fear has featured in American politics and society since before the nation’s inception. The first slaves arrived in the United States in 1619, at Jamestown. As the slave economy flourished in the South, order was imposed by slave patrols: white men on horseback who patrolled plantations and the surrounding countryside at night, beating or killing escapees. After the Civil War, the slave patrols were replaced by Jim Crow laws which mandated racial segregation, and by the Ku Klux Klan. Southern Democrats opposed a law banning lynchings as late as the 1930s.

In 1948, the Democratic Party adopted a vow “to eradicate all racial, religious and economic discrimination” as a part of its official platform. Southern segregationist whites, who, up to that point, had voted consistently for Democratic candidates, viewed the platform of racial equality as a provocation. In response, these voters created the States’ Rights Democratic Party and nominated South Carolina Governor Strom Thurmond for president. Thurmond labeled civil rights “infamous and iniquitous,” “totalitarian” and the opening salvo of “a Police Nation...

What Is QAnon, the Viral Pro-Trump Conspiracy Theory?
8