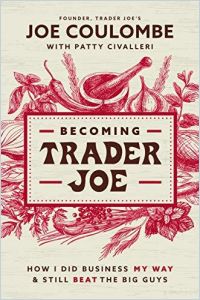 Imagine a grocery store where every full-time employee makes a salary at least equal to the area’s median family income – a chain with a stock of unique, private-label goods providing excellent value. Imagine that it focuses on its target demographic to build cult-like loyalty. This is Trader Joe’s. Joe Coulombe tells how he built Trader Joe’s into a success, offering anecdotes in a casual, idiosyncratic style. His account is neither linear nor ordinary – just like his stores.

Joseph Hardin Coulombe, a Stanford-educated economics major and MBA recipient, founded Trader Joe’s, served as a consultant to and leader of companies in distress, and held seats on numerous boards. He died in February 2020. Patty Civalleri has written several travel books on Italy’s art and culture.

In 1958, 28-year-old Stanford MBA graduate Joe Coulombe – pronounced coo-LOAM – started a chain of convenience stores called Pronto Markets “under the aegis” of Rexall Drug Company. In 1962, he bought Rexall’s interest in seven markets. Coulombe retained a controlling interest and allowed employees to buy the rest of the shares. The stores that became Trader Joe’s cost him $25,000.

By August 1967, Coulombe had 18 Pronto Markets and had opened the first Trader Joe’s in Pasadena, California. The company, born in an environment of “fun-leisure-party-prosperity,” began as a self-described “Good Time Charley” shop, with a huge selection of wine and hard liquor in a combination party goods and convenience store.

In 1973, the company bought a California Master Wine Grower’s License, allowing it to ...