Summary of Behind the Kitchen Door 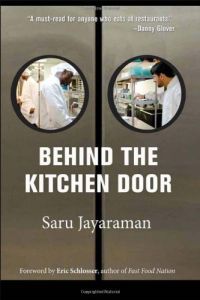 Americans are rethinking how they eat. They want organic, fresh, local food sourced from humanely treated animals. But sadly, they mostly ignore the people who package, cut, clean, prepare and cook their food. Saru Jayaraman – founder of the Restaurant Opportunities Center (ROC), an advocacy group for restaurant workers – reports that many food industry employees face dangerous, abusive working conditions. She profiles employees who have dealt with stolen wages, underpayment, working when sick or injured, discrimination or sexual harassment. Each chapter offers another sad example. One ray of hope is the ROC, which works “to improve wages and working conditions for the nation’s 10 million restaurant workers.” While cautioning readers that other points of view often counter presentations from passionate advocates like Jayaraman, getAbstract recommends her vivid report to diners and restaurant managers who want to make a difference. If she’s right, even in part, something is rotten in the kitchen.

Americans are thinking more about where their food comes from, and they’re concerned about decent treatment for food-source animals. But they think far less about the people who prepare and serve their food. While celebrity chefs rake in millions, many of their employees earn only $2.13 per hour plus tips. Ten million people work in restaurants, including “seven of the eleven lowest-paying occupations in America.” Many restaurant workers don’t speak up because they fear losing their jobs. Most are immigrants with limited English-speaking skills or few job options.

When the September 11, 2001, terrorist attacks destroyed the World Trade Center, thousands of people lost their jobs, including workers from Windows on the World, a luxurious restaurant on the top floor of the North Tower. Windows’ owner promised his displaced workers that they would get their jobs back when he opened a new restaurant. He reneged, claiming his former employees were “not experienced enough.” Because they belonged to a union, the former workers had employment benefits and their wages were much higher than comparable restaurants paid.