Summary of Between Debt and the Devil 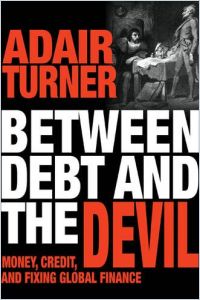 In this authoritative book, Adair Turner thoroughly takes apart the flawed assumptions that contributed to the 2008 crisis, and he details the realities of modern economies and financial sectors. Turner explains how and why economies have shifted, and why society’s attitudes toward borrowing, banks and money creation need to change in response. Otherwise, he writes, the world will remain mired in growing debt and recurring boom-and-bust cycles. Turner’s work is a bold challenge to the status quo and a carefully argued wake-up call.

Adair Turner, former chairman of Britain’s Financial Services Authority, is chairman of the Institute for New Economic Thinking and the author of Economics after the Crisis.

Lasting from the the 1980s to 2007, the period of the Great Moderation had central banks fine-tuning base interest rates in response to signs of inflation. But that turned out to be disastrous monetary policy when a boom in lending, leverage and credit creation failed to move the inflation dial. Mainstream economists and authorities misplaced their faith in the concept that the free market would automatically provide an economy the optimal amount of credit.

Before 2007, the consensus was also that the merits of free market innovation should permit actors within the financial system to create all the new products and contracts they desired. The erroneous belief was that this would improve the stability and robustness of the system by “completing” markets, better allocating risks and increasing liquidity. But the innovations in many cases allowed more credit creation and thus more speculation to feed a property bubble. When the tide went out and markets seized, it became clear that risk allocation was poor.