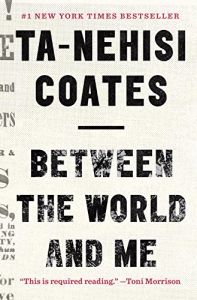 Between the World and Me

The review below was first published in the getAbstract Journal on Nov 25, 2020.
We’ve reviewed this title for you as we currently cannot offer a summary.

An Arc That Doesn’t Bend

Will America ever achieve racial justice? And how should Black Americans live while it doesn’t? An influential Black intellectual offers a bleak assessment of the prospects for justice in America, and advice for living in struggle today.

During the spring and summer of 2015, followers of Ta-Nehisi Coates awaited the publication of his Between the World and Me with immense curiosity and, in at least one critic’s mind, joy. Coates gathered a wide readership after joining The Atlantic as a national correspondent and, later, senior editor. Since 2008, he has written such influential and sometimes radical essays as “Fear of a Black President” and “The Case for Reparations.” Coates’s blog, covering politics, race and culture, has won a devoted and engaged following.

The spring of 2015 saw the death of Freddie Gray, a 25-year-old Black man who died after a “rough ride” in the back of a police van in Baltimore; violent protests and riots ensued. In June, a white gunman murdered nine Black worshipers at the Emanuel African Methodist Episcopal Church in Charleston, South Carolina. During a season of grief and outrage, when mobile phones brought home vivid images of the beatings and murders of Black Americans, Coates’s forthcoming book offered readers not only the hope of unconventional insight and galvanizing truth but also the heartening sight of a young Black writer – one who began his life in a Baltimore hood and who had found his voice by writing outspoken essays and blog posts – now gaining national attention by producing an ambitious and timely book. New York Times columnist Michelle Alexander wrote that she had felt “overjoyed” at the news of Coates’s forthcoming book.