Summary of Beyond Performance 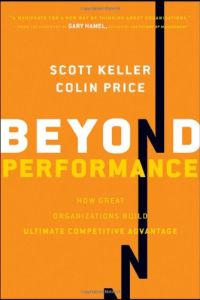 American poet Ralph Waldo Emerson once said, “The first wealth is health.” This holds true for businesses as well as people. In this comprehensive report, McKinsey & Company consultants Scott Keller and Colin Price draw on their extensive research to explain how companies can achieve superior business performance in the long run while maintaining their organizational health. This clear set of instructions offers a new spin on maintaining commercial success in the medium to long term; however applying the book’s program requires a dedicated time commitment. getAbstract recommends this impressive manual to leaders who want to achieve top performance, institute constructive transformational change, inspire their employees and invest in their organizations’ long-term well-being.

Sometimes, a firm’s profitability, financial productivity and business performance harm its rivals. In 2005, Toyota was performing so well that it hoped to supplant General Motors (GM) as the world’s leading automaker. Due mostly to robust US sales, Toyota produced a 39% jump in net profits in 2006. Toyota enjoyed a sterling reputation for production expertise, quality automobiles and harmonious relationships with its many suppliers.

However, Toyota’s plan to outdo GM meant expanding dramatically. Maintaining its strong supply-chain operations would be very difficult. The firm would need to develop new working relationships quickly with numerous non-Japanese suppliers. Toyota lacked sufficient senior engineers to monitor new suppliers around the globe or to teach them how to adapt their operations to the “Toyota Way.” Such potentially disruptive problems all became painfully real.

As a result, Toyota proved unable to maintain its production and quality standards, and it suffered a medium-term drop in performance. By 2010, its manufacturing base had become so fraught with problems that Toyota had to recall certain models due to safety...