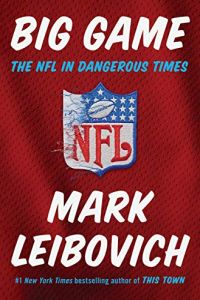 The National Football League has become a platform for conflict, reports New York Times journalist Mark Leibovich (writing before COVID-19 and its impact on professional sports). The biggest continuing issue is the debate about a connection between concussions and brain disease. Controversy also arose as some players protested incidents of police racism by kneeling – instead of standing – during the pregame national anthem. Despite waves of negative publicity, wealthy NFL teams owners continue to prosper under the leadership of Commissioner Roger Goodell. Since the owners hired him in 2006, most teams have doubled in value.

The value of most teams in the National Football League has soared, despite disciplinary and safety issues involving NFL players.

In 2017, the National Football League (NFL) extended Roger Goodell’s contract as commissioner. Under his leadership, the league has become the nation’s “most polarizing sports brand.” Among other controversies, star player Ray Rice punched his fiancée, knocking her down at an Atlantic City casino. Goodell suspended Rice for two games. But after a tabloid published a security video showing Rice striking his fiancée and dragging her out of an elevator, Goodell imposed an indefinite suspension. The incident cast doubt on how seriously the NFL regards domestic violence and how long Goodell would be commissioner.

Most NFL team owners have been content with the league’s financial performance under Goodell, who wants to fatten its gross revenue to $25 billion by 2027, up from $14 billion in 2017. During his tenure, which began in 2006, the value of most NFL teams has doubled.

Concern about players who suffer multiple concussions is the primary existential threat to professional...

Diversity, Inc.
8
Move the Ball
8
The Stuff
9
The Playmaker’s Advantage
8
It’s Even Worse Than You Think
8
Dark Towers
8