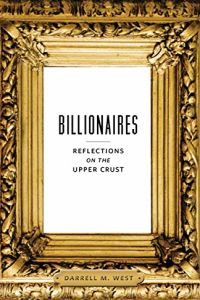 Activist billionaires in the US spend millions of dollars on political campaigns and issue advocacy. Supreme Court rulings enabling unlimited spending by super political action committees (PACs), opaque accountability and increasingly weak investigative journalism paved the way for a new political philanthropy. Darrell M. West, the Brookings Institution’s vice president of governance studies, contends that the agendas of rich activists – such as Charles and David Koch, Sheldon Adelson, Michael Bloomberg and George Soros – don’t align with the interests of the general public. He takes a hard look at politically motivated philanthropy and its impact on the US government and its citizens. While always politically neutral, getAbstract recommends West’s carefully researched, well-reasoned analysis of the impact of personal wealth on the democratic process.

Darrell M. West, vice president and director of governance studies at the Center for Technology Innovation at the Brookings Institution, wrote or co-wrote 20 books, including the bestsellers Air Wars and Digital Government.

Since 2005, the assets of the US super-rich have doubled from one to two trillion dollars. America’s moneyed one percent controls one-third of US wealth. While after-tax income for average workers remained about the same from 1979 to 2009, the top one percent’s income rose 155%. Taken together, the members of the world’s top one percent – Russian “oligarchs,” Chinese “princelings,” Middle Eastern autocrats and tycoons around the globe – own more than 40% of global wealth.

The Palma ratio, a metric comparing the wealth of the top 10% of a population to the bottom 40%, shows that the US suffers greater inequality than any other developed nation. The wealth disparity between whites and blacks in the US has almost tripled since 1990. According to Forbes magazine, 492 of the world’s 1,645 billionaires live in the United States.

Today’s billionaires use their wealth to influence elections, bankroll advocacy campaigns and steer public policy. The rich are more politically active than the general public and their views differ from those of average citizens. As a group, they are much more conservative on taxation, education, health care...