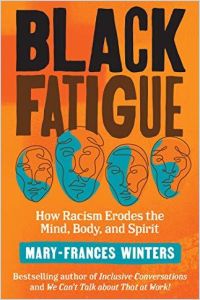 Mary-Frances Winters is the founder and CEO of The Winters Group, a women- and minority-owned consulting firm specializing in global diversity and inclusion.

Systemic racism passes trauma and stress down through the generations, causing “black fatigue.”

Black fatigue is a consequence of the oppression that racist systems have perpetuated against Black people and their communities for generations. The collective trauma Black people must live with contributes to Black fatigue.

Black people still experience racism on multiple levels today: interpersonal, institutional, structural (as when corporations fail to prioritize diversity and inclusion) and internalized. White people must aspire to be antiracists and push for systemic change.

White people should stop denying their privilege and act as agents of social change.

During the 2020 protests supporting the social movement Black Lives Matter, many white people reacted by claiming ignorance of how everyday racism affects Black people. White people sometimes experience “sublime ignorance” about racism, because they don’t feel the need to understand something that doesn’t have a direct impact on them. Instead, people should recognize the advantages they have and stop denying “white privilege.” White people also need to become better at understanding which...

The Memo
9
The Sword and the Shield
9
Diversity, Inc.
8
Frederick Douglass
10
The Color of Money
9
#MeToo in the Corporate World
9