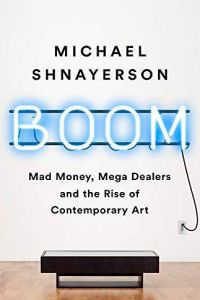 Journalist Michael Shnayerson provides a gripping, thorough backgrounder on the contemporary art market as he narrates the growth of the art world and competition among its leading players. He tracks the careers of major dealers, and explains the rise of auction houses and the global expansion of art sales. Readers new to the ravages of the art scene will find that Shnayerson offers a fresh view of this world – now the fulcrum of a cutthroat, personality-driven, globally financed industry.

The art market has undergone massive commercial, geographic and economic growth. Today, it is a “$63 billion global bazaar.” Galleries and dealers transformed the art world from a small coterie of committed collectors into a social nexus for the elite as they establish taste, trends and markets around the world.

In the 1950s on New York City’s Upper East Side, The New York School on 57th Street became an internationally legendary arts academy through the efforts of Betty Parsons and Sidney Janis. On 77th street, Leo Castelli and his gallery made a name for abstract expressionists. His business decisions altered the industry. He created satellite relationships with other galleries and split commissions to build sales.

You May Also Like
9
Mag Men
9
Taking the Work Out of Networking
8
Global Gay
8
Creative Quest
8
Lose the Resume, Land the Job
8