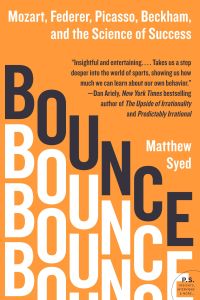 A United Kingdom table tennis champion, Matthew Syed recognizes that he succeeded not because of innate talent, but rather due to the special circumstances of his youth. He was able to learn from expert, dedicated teachers and to practice all the time. Syed knows he was fortunate and, to his credit, he worked hard to become as good as he could be. He discusses the science that demonstrates the validity of the adage, “Practice makes perfect.” He explodes the “talent myth” by presenting scientific evidence that people who practice with enough diligence, patience and focused intensity can become great, regardless of the presence or absence of supposedly inborn ability. Syed covers numerous other fascinating topics, including racial stereotypes, the “placebo effect” and baseball players’ “good luck” rituals. Syed’s well-researched, enlightening book is a hymn to the power and efficacy of practice, dedication, determination and hard work.

Matthew Syed, a BBC commentator and The Times columnist, has won numerous British journalism awards. In table tennis, he is a two-time Olympian and a three-time Commonwealth champion.

Excellent performance, even in sports or the arts, does not require talent. It requires years of “purposeful practice.”

Hungarian educational psychologist Laszlo Polgar and his wife, Klara, decided in the 1960s to train their children from their earliest years to be great at some special activity. Both believed that innate talent meant little and practice, everything. Polgar, a chess hobbyist but no expert, chose the game for its objective performance ratings.

Polgar began to teach chess to his daughter Susan before she was four years old. When Polgar entered her at age five in her first chess tournament, Susan had already spent many hundreds of hours in concentrated practice. Most of her opponents were at least twice her age. Susan won her first tournament by a score of 10 to nothing. Susan’s younger sisters, Sofia and Judit, also studied chess with their father. They all greatly enjoyed it. According to Judit, “We spent a lot of hours on the chessboard, but it did not seem like a chore because we loved it.”

Thinking in Bets
6
The Book of Gutsy Women
9