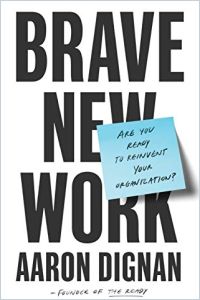 A genre of books imploring companies to abandon 20th-century management practices has sprung up since the blockbuster success of McKinsey’s The War for Talent in 1999. In this bestseller, Aaron Dignan writes as a CEO who has seen the light. Though he repeats much of the new conventional wisdom, Dignan contributes fresh, engaging examples, anecdotes, analogies and facts. They include the origins of bad management practices that began as a clever means of enemy sabotage in World War II. The commonsense transformations he recommends will entertain and inform those interested in engagement and performance.

Aaron Dignan is founder of The Ready, a consulting firm that advises businesses on reorganizing themselves. He also wrote Game Frame: Using Games as a Strategy for Success.

During World War II, William Donovan, head of US intelligence, led the covert distribution of a book about conducting sabotage behind enemy lines. One chapter described how partisans should disrupt enemy business operations. Those acts of sabotage – like requiring three or more people to sign off on any decision, or strict adherence to regulations and rules – are standard operating procedure in most large, bureaucratic firms today.

Despite the enormous changes of the past century, the way organizations manage people hasn’t kept pace. People get stuck doing things the way they and their predecessors have always done them. There’s a better way. Treat your employees like adults. Don’t manage them; trust them. Create teams and staff members who don’t need you.

Adopt the mind-set of change and apply it in your own way, unique to the needs of your firm.

Today’s predominant management mind-set derives from the work of Frederick Winslow Taylor, who developed what he called a “scientific approach...