Summary of Breaking the Silence Habit 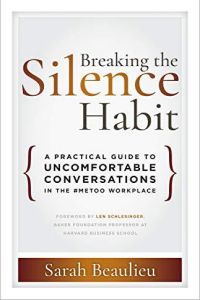 Workplace consultant and trainer Sarah Beaulieu went on a two-year “listening tour” to learn to understand how people talk about sexual violence. Interviews with leaders, experts in sexual harassment and violence, and men and women from diverse backgrounds led her to create a five-point framework to guide people through the workplace conversations they need to have in the wake of #MeToo. She offers a ticket past the eye-rolling and grumbling that usually accompany office training and shows how to make people feel safe so they can do their most productive work.

A safe, productive work environment requires people to develop a new competency: the ability and willingness to engage in uncomfortable conversations.

One out of every two transgender individuals, one out of three women, and one out of six men have experienced sexual abuse or assault. In 2018, a Pew study found that due to the recent cultural focus on sexual harassment, 51% of men were unsure about how to interact with women at work. A June 2016 US Equal Employment Opportunity Commission (EEOC) study found sexual harassment rates of up to 85% in some industries. It’s likely that sexual abuse or violence already influence your workplace even if no one talks about them openly.

Conversations about sexual abuse are uncomfortable and often unpredictable, but avoiding them doesn’t lead to change. You’ve likely witnessed legal, financial and public relations disasters arising from sexual misconduct in the workplace. The loss of productivity stemming from working in an unstable or unsafe environment is less visible but similarly damaging.

Good and Mad
9
Feminist Fight Club
8
Modern Manhood
8
Rule Makers, Rule Breakers
8
How to Be an Inclusive Leader
9
The Fix
9