Summary of Brick by Brick

Crown, 2013
From the book: BRICK BY BRICK: How Lego Rewrote the Rules of Innovation and Conquered the Global Toy Industry. Copyright 2013 by David C. Robertson. Published by Crown Business, an imprint of the Crown Publishing Group, a division of Penguin Random House LLC
ISBN: 9780307951601
Pages: 320 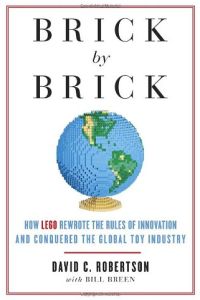 Books on innovation strategy tend to focus on how to free the creative spirit. But as the history of the LEGO Group shows, imposing discipline and limits on your company’s innovation culture is equally important. Faced with a changing toy market in the 1990s, Lego responded with a decade of unbridled creativity, tripling its new toy offerings and moving into all possible markets. The result was a near disaster. In 2004, a new management team demonstrated that successful innovation alone is not enough. You must balance freedom with discipline, pacing and practicality. In this entertaining, detailed account, Wharton School professor David C. Robertson, writing with former Fast Company editor Bill Breen, shows how Lego’s management mishandled seven best practices of modern innovation and how the company subsequently modified these tenets to fit Lego’s unique culture. getAbstract recommends this trip to the business side of toy land to senior managers, product designers and developers, marketers, entrepreneurs, and anyone who still has a bucket of Legos in the closet (sure, they’re for the kids…).

David C. Robertson teaches at the Wharton School. He previously taught innovation and technology management and was Lego professor at the IMD business school in Lausanne, Switzerland. Bill Breen is a former senior editor at Fast Company magazine.

Inside and Outside the Box

Successful innovation requires balancing a business’s core and its fringe. If you play it too safe and persist too long in making only incremental improvements to your core products, your portfolio will grow stale, undermining profits and inviting disruption. But if you vest only in freewheeling invention, you risk diluting your brand and overwhelming your productive capacity.

At the end of the 20th century, the Danish toy giant LEGO Group experienced both extremes as it sought the right mix of inside- and outside-the-box thinking to spark growth. After eight decades of accelerating growth, Lego faced new challenges. Kids increasingly embraced electronic and digital diversions – video games, computers, VCRs – and Lego’s longstanding portfolio of plastic construction toys lost its sales oomph. In 1993, its 15-year streak of double-digit growth plateaued. Before the decade was over, Lego saw its first-ever losses and layoffs.

Lego had always driven growth with experimentation. In 1994, in the face of these new problems, it embarked on a multiyear innovation spree, building its portfolio and pushing into new markets. In 1998, a new management...