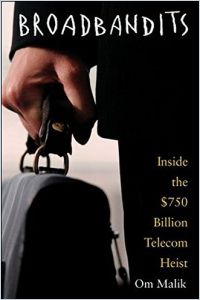 If you’ve glanced at your retirement account balance or brokerage statement in the past few years, you no doubt have felt the effects of the broadband bubble. Less publicized than the 2000 tech wreck, the broadband meltdown was every bit as costly. Journalist Om Malik gathers the varied tales of telecom shenanigans and then adds up the stock sales so you can see how much the broadbandits took. Malik’s engaging and vitriolic writing style is fun to read, and he makes the intriguing assertion that the telecoms outdid the dot-coms in terms of sheer greed and gall. getAbstract.com suggests this book to investors who hope not to get burned, and to executives responsible for safeguarding shareholder value.

Journalist Om Malik is a senior writer for Business 2.0 magazine in San Francisco. Malik previously worked for Red Herring and Forbes Online. His articles also have been published in The Wall Street Journal, Brandweek and Crain’s New York Business. Malik worked briefly as a venture capitalist.

A Bigger Swindle than the Dot-Coms

If you mention the word bubble, many people will immediately think of the dot-com boom. Internet companies sprang to life in the late 1990s and raised billions from eager investors. Many of these stocks plunged or disappeared in 2000, leaving investors with a sour taste and the conviction that they would never let themselves get suckered again. But even more devastating than the “dot-com” collapse was the stealthy flameout of telecommunications companies. Firms such as WorldCom, Qwest, Lucent and Global Crossing spent lavishly on fiber-optic networks, which they promised would bustle with traffic from the growing legions of Internet users. Instead, the predictions proved far too optimistic. The customers who the companies expected to pay for these high-speed broadband networks never materialized.

Compared to the high-profile crash of the dot-coms or the death of Enron, the telecom downturn was quieter and less publicized. But its economic effects turned out to be farther-reaching. When the telecom bubble burst, $750 billion in wealth disappeared, and some 600,000 employees lost their jobs. Where the dot-coms attracted young, risk-...