Summary of Can We Have Prosperity Without Growth? 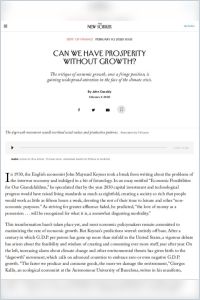 In this thought-provoking article, journalist John Cassidy sheds light on the proliferating debates about the value and perils of ever-rising economic growth. He acquaints readers with the prominent “degrowth” and “green growth” reform movements that seek to redefine 21st-century beliefs about capitalism and the common good. His overviews of the potentials and hard realities of these new paradigms emphasize the embedded nature of economic life within the environment and society.

John Cassidy is a staff writer on politics and the economy at The New Yorker.

A “degrowth movement” is gaining popularity due to the climate crisis.

Gross domestic product measures the size of a nation’s economy; that is, the country’s output. Economic growth in production leads to both increased consumption and rising standards of living. But growth comes with environmental costs, and the climate crisis has sparked an intense debate about sustainability. The degrowth movement posits that, to protect the environment, countries should aim for “zero or even negative GDP growth.”

Degrowth, however, can lead to social imbalances and discontent, an effect already visible in many of the advanced nations. In the emerging markets, which have embraced industry as a motor for development, a lack of growth would stall the progress... 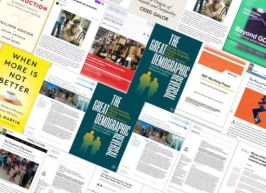