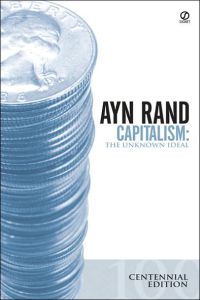 At one time, Ayn Rand was a sensation, and her ideas retain a hold on the libertarian movement. Her books are longtime bestsellers, but for most readers she is a phase rather than an intellectual foundation. Leftist critics seem to think she represents conservatism, although that’s not quite accurate. In her heyday, she had as many opponents on the right as on the left. This book presents a collection of essays by Rand and fellow contributors Nathaniel Branden, Alan Greenspan and Robert Hessen, thinkers who helped shape a unique philosophy in American political thought. Although Rand is still a political presence, her reach has diminished and her disciples have maintained varying degrees of faithfulness to her principles. For example, you would hardly recognize the Alan Greenspan of this book in his present guise as the retired chair of the Federal Reserve. getAbstract recommends this book to both proud and skeptical capitalists, as well as students of U.S. political culture.

Ayn Rand is best known for her political novels The Fountainhead and Atlas Shrugged, which are still widely read. In her day, she attracted both loyal fans and furious critics.

Capitalism is not simply an economic system; it also involves freedom, individual rights and morality. The notion that individual liberty stands above the power of the state is uniquely American.

Socialists of the 1950s talked about a “social surplus,” but, in fact, such a thing did not exist even then. “All wealth is produced by somebody and belongs to somebody.” Under capitalism, people own their bodies, their thoughts and the fruits of their labor, and no one can deprive them of these without mutually negotiated payment. Any other confiscation is theft, no matter how philosophers adorn it. Capitalist societies enforce the principles of liberty and property through the free market.

Some argue that capitalists fight wars to enrich themselves. Nothing could be further from the truth. Governments wage wars by immorally compelling their citizens to fight them. They engage in policies that invite conflict and steal their citizens’ property to fuel the war machine. Once people become soldiers, they lose their humanity, because the state takes away their freedom of choice. The state should exist to protect the rights of its citizens, not to consume...