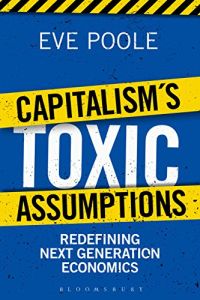 Classical assumptions about competition, pricing and other elements of capitalism find little support among modern theories of market economies. For example, game theory emphasizes the importance of cooperation and undermines the old theory that competition is always the best business strategy. Adopting alternatives to these seven now “toxic assumptions” could extend the life of capitalism. For example, a shift toward business cooperation – and away from competition – could unfold as more women ascend to top management jobs. New business models could encourage reinvestment instead of job cuts and dividend distribution. Business lecturer Eve Poole’s exhaustive treatise calls for economic theories about capitalism to evolve, with a nudge from new public policies. While always politically neutral, getAbstract recommends her thinking to policy makers, as well as to anyone with a background in economics and an interest in how the field’s thinking should evolve.

Eve Poole is a Leadership Associate at the Ashridge Business School. She wrote Temple Tract Book 4, God and Money, for the Temple Foundation, where she is an associate research fellow.

Scottish philosopher Adam Smith’s influential Inquiry into the Nature and Causes of the Wealth of Nations, written from 1766 to 1776, serves as the literary foundation of capitalism. Some revere it as the bible of modern capitalism. But today, the capitalist orthodoxy in The Wealth of Nations could turn out to be a deterrent to the advance of market economies. Since the book’s publication, seven “toxic assumptions” about capitalism have gained a foothold and now threaten the economic system’s evolution.

These seven intellectually assailable misconceptions concern the nature of competition, the so-called invisible hand, and other popular economic theories. The deadly capitalist sins are:

1. “The Assumption of Competition”

Capitalism makes the core assumption, as Smith wrote, that competitive markets produce the best products and services for the best prices. A mathematical perspective reveals the flaws in this assumption. Game theory, a branch of math centering on the study of strategic decision making, challenges the assumption of competition’s virtues. It shows that cooperation may ...