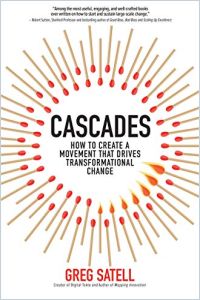 Rev. Martin Luther King Jr. couldn’t have achieved all he did in the fight for civil rights without the activists who joined his “cascading movement.” Innovation adviser Greg Satell uses this example and many others to glean six principles central to transformational change due to social, political, military and corporate uprisings. Movements start with a concrete “keystone change” that mobilizes the masses nonviolently. This well-referenced report offers fascinating new and historic examples. Read deeply: The examples sometimes dilute Satell’s bold, pivotal messages about networks, allies and cascades.

Writer, speaker and innovation adviser Greg Satell specializes in transformational change. He is also the author of Mapping Innovation.

A “cascade” is a movement that scales and gains support from many small-group networks. Cascading movements succeed based on six principles.

Hierarchies used to be very powerful, but that has changed. As the world around hierarchies has become faster – including the pervasive growth of digital technology – other forms and structures, like networks, have gained impact. Those networks tend to form “tight clusters” as the social distance between their members decreases.

These new networks have important advantages over hierarchies. While networks have low formal hierarchy and control, they empower their members at the frontline level of an organization. Cascades form out of these networks and make movements successful as they reach "easily influenced" people who influence others in turn.  Connections among a movement’s supporters make the cascade strong. For example, consider these social and political movements worldwide: