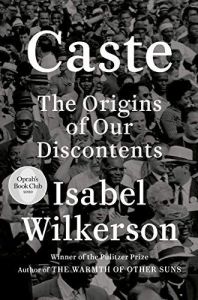 The Origins of Our Discontents

The review below was first published in the getAbstract Journal on Dec 22, 2020.
We’ve reviewed this title for you as we currently cannot offer a summary.

A  Classic of American History

Pulitzer Prize-winning author Isabel Wilkerson presents an indispensable overview of racism in the United States and its economic and social impacts.

Isabel Wilkerson, a New York Times reporter and winner of the Pulitzer Prize and the National Book Critics Circle Award, teaches and lectures at major universities. Her masterwork on the racial underpinning of American society is deeply revelatory about the contemporary state of the nation and its return to vehemence about race.

Wilkerson describes a caste system profoundly embedded in American culture and society that evokes Germany’s darkest times. She regards this system as deliberately built on terror and lies spanning four centuries. Her unrelenting – and controversial – analysis harks to humankind’s capacity for evil, but offers hope that increasing numbers of white Americans will join in the demand for equality for all.

Book
The Warmth of Other Suns

Stamped from the Beginning
9
Book

Why Are All the Black Kids Sitting Together in the Cafeteria?
10
Book
The New Jim Crow
9
Book
Women, Minorities, & Other Extraordinary People
Book
An African American and Latinx History of the United States