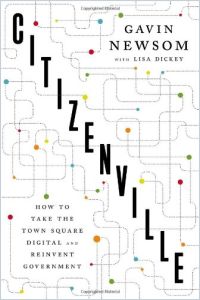 California Lt. Governor Gavin Newsom, writing with Lisa Dickey, offers stimulating ideas about the possibilities of a more open, robust democracy in the digital age. His title evokes popular games like Farmville, in which people improve virtual farms. In Newsom’s future, people improve their communities. He loads his book with examples of how government can create innovative solutions that engage citizens directly. He also cites many possible beneficial results of increased direct engagement. getAbstract recommends his forward-looking thesis to anyone intrigued by a civic future that offers an alternative to partisan gridlock and policy paralysis.

Government Is the People

Unlike most government agencies, citizens and businesses are accustomed to wireless technologies, social media-enabled collaboration, less privacy and a greater degree of transparency. For government to catch up, it must rethink these issues.

Government happens in the background of daily life: in the streets and subways you use to commute, the libraries and public schools your kids attend, regulated utilities, inspected food, monitored air pollution, and even the Internet, which was developed by the US Defense Advanced Research Projects Agency (DARPA). Government consists of lots of people – not politicians – working hard in agencies and offices to keep such services running. Government is the people, and in a democracy, the people are the government. It is not them and us; it’s all us.

Information-Fueled Power to the People

New technologies have redistributed power from traditional hierarchies, causing a fundamental shift in the way people and governments interact. Information can pave the way for change. To take advantage of these new opportunities, government should make accurate, searchable information easily available in ...