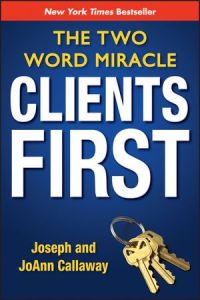 Joseph and JoAnn Callaway, owners of the Arizona real estate firm Those Callaways, offer a homespun, endearing tale about their adventures in real estate and their sales of more than $1 billion in homes during their first 10 years of business. The secret to their success: Always put your clients first. While they present an attractive, adaptable and ethical business philosophy, their special story isn’t perfect: The narrative is slow moving and repetitive. And the Callaways sometimes push the boundary between wholesome anecdotes and cloying sentimentality. However, getAbstract recommends their wonderfully unaffected, uplifting memoir to all businesspeople who want to serve their clients better.

Joseph and JoAnn Callaway own Those Callaways, a Phoenix, Arizona, real estate firm.

Who Do You Serve?

In 1997, authors JoAnn and Joseph Callaway started Those Callaways, an Arizona real estate company. Before long, the rookie real estate agents confronted a moral dilemma: As permitted by their state’s law, in one potential housing deal, the couple represented not only the sellers (the Smiths) but also the buyers (the Browns). They faced a seemingly contradictory fiduciary obligation based on doing their best for both parties.

How could they responsibly represent the opposing fiscal interests of both sides of a real estate deal? The Smiths were anxious to sell. They had found a new house and had already signed a contingency contract.

The Browns were eager to buy the Smiths’ house. If Joseph and JoAnn could get the Browns and the Smiths to close the deal, the neophyte real estate agents would earn commissions from two sales on a single deal. Moreover, once the Browns purchased the Smith’s house, the Browns had to sell their current home. The Callaways were in the ideal position to handle that sale, too.

As real estate agents, they would earn significant commissions if the Browns bought the Smiths’ house. However, they recognized that the...