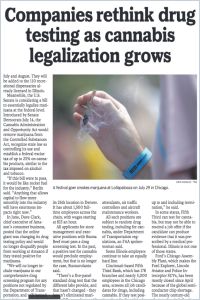 Writing in the Miami Herald, reporter Robert Channick covers how companies regard marijuana use in states where it’s legal for medical or recreational consumption. Amid a major societal and legal shift around cannabis, the pandemic prompted employees and businesses to re-evaluate the relevance and value of marijuana testing in hiring and in continuing employment.

Robert Channick reports on business for the Chicago Tribune, which syndicates his work to other publications.

During the pandemic, US attitudes toward marijuana and its legal status at the state and federal level continued to change.

Continuing a trend that has been underway for some time in the United States, more than 90% of adults now believe marijuana should be legal for medical purposes, and 60% favor legalization for recreational use. During the first year of the COVID-19 pandemic, as many as 25% of the population used marijuana – with one in four of those people trying it for the first time.

Eighteen states have legalized recreational marijuana and a total of 37 states now allow its medical use. When Illinois, for example, removed marijuana’s controlled status in January 2020 – during the pandemic – cannabis quickly became a billion-dollar business there. In the United States overall, experts project that legal marijuana sales will amount to more than $30 billion in 2022.

The Cannabis Administration and Opportunity Act pending in the US Senate would remove marijuana from the Controlled Substances list nationwide.

The legislation would also recognize state laws governing the use of marijuana and allow for an up to&#...

How Legal Weed Destroyed a Counterculture Icon
8
The State of Mental Health in America 2020
9
The Future of Work
9
Six ways your office will be different in 2021, assuming you ever go back to it
8
Facebook Will Now Let Some Employees Work from Anywhere, but Their Paychecks Could Get Cut
7
If we want more companies like Patagonia, we need laws to enforce it
7